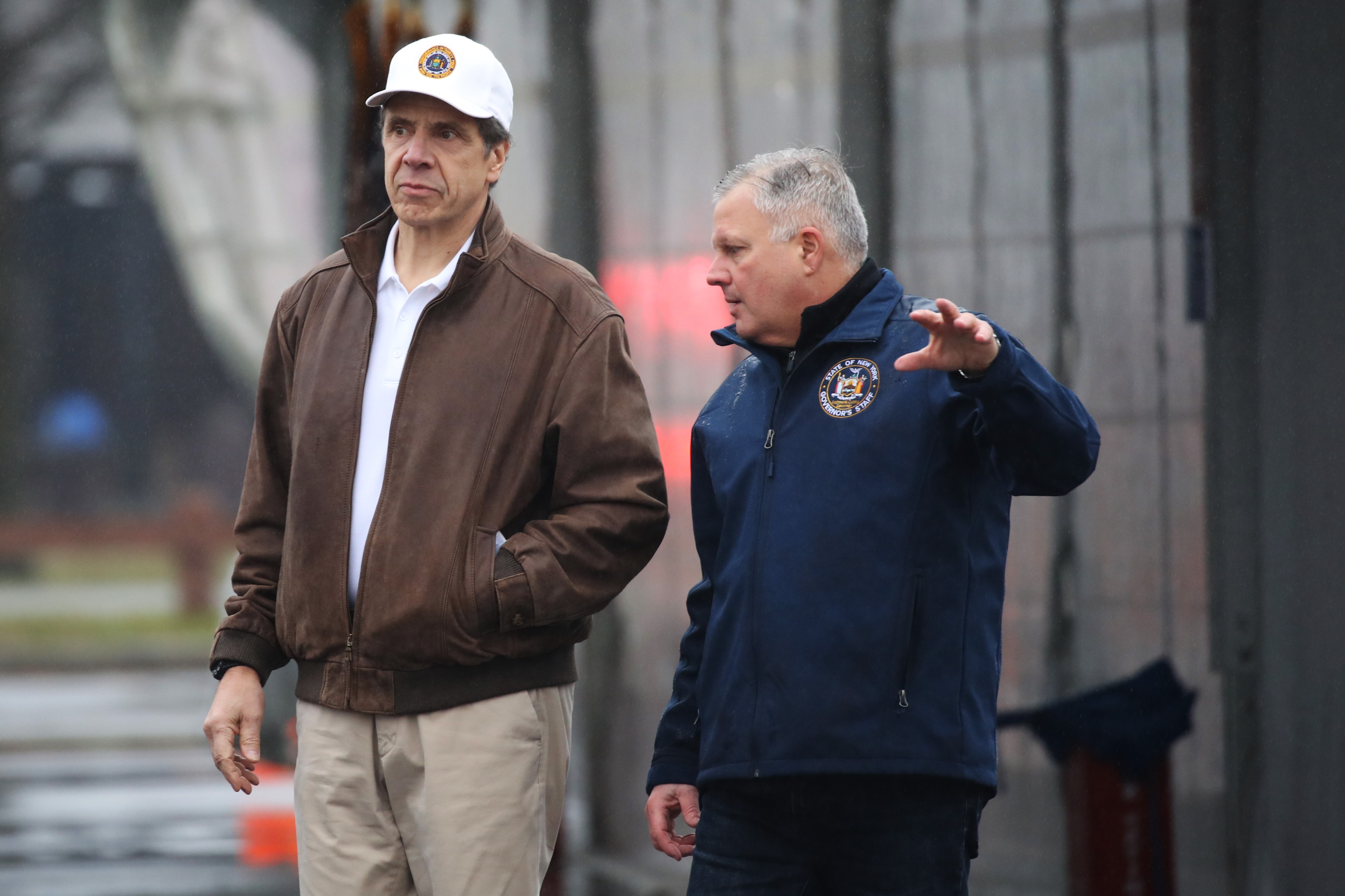 Cuomo, in other words, is dressing for facts only.

Over the course of the presidential primary season, the Democratic candidates seemed to think that just appearing in rolled up shirtsleeves marked you as, well, ready to really roll up your shirtsleeves—which means the most prominent appearances of liberal male politicians in recent months found them in shirtsleeves. But here comes Cuomo in his suit and tie, his shirt bunching together under his jacket as he leans in to the microphone, daunted but not discouraged, to talk to us like the baseball coach-in-chief: “This is not a short-term situation. This is not a long weekend. This is not a week,” as he said on Sunday. The archetypal centrist, Cuomo has worn ties that are beige, purplish, bluish. Sometimes there’s no tie at all, but he’s not in business casual—it’s something more like the inner politesse that peeps up to remind a guy that when you go to a funeral, you wear a suit. It’s the kind of dressing that Cuomo codified as President Bill Clinton’s last secretary for Housing and Urban Development. It’s also the kind of political dressing that Trump, along with Steve Bannon in his Barbour slovenliness and Jared Kushner with his skinny suit diplomacy, upended, along with so many other things.

Sometimes there’s no suit at all. Cuomo has another look in his arsenal: a hat and polo featuring a special version of the New York State seal with an extra ring around the exterior that reads, “PERFORMANCE * INTEGRITY * PRIDE * I WORK FOR THE PEOPLE.” A representative for his office explained that the seal was designed by Cuomo himself when he first took office in early 2011, and began as a lapel pin for everyone in his administration to wear. (Citizens cannot purchase the hats, polos, or any other items emblazoned with the seal. Sorry merch heads, no Cuomocore for you!) Cuomo is also responsible for the blue and gold color scheme. “I have an artistic side,” Cuomo told the New York Times in 2011 of designing the pin, “that I like to stay in touch with from time to time.” On Saturday, his toned arms bulged beneath the short sleeves of his white polo; at the opening of New York’s first drive-through testing site in New Rochelle, he wore a suede jacket and his special seal cap, not much different than what the past four presidents, including our current one, typically wear to disaster sites. (See Rudy Giuliani visiting Ground Zero after 9/11 in a baseball cap and FDNY windbreaker, or Barack Obama visiting sites impacted by Hurricane Sandy in 2012.) The difference is that when Trump wears them, he blows up to clown-nose proportions, with that big weird white “USA” cap that looks like something he designed on Zazzle and his black disaster zone jacket—perfect for playing golf in windy conditions, if nothing else.

Cuomo is working from an old script, one established by his political predecessors, and one whose cliches Trump purported to abandon. Trump, in his theatrics of domination, engages in a contorted kind of dressing down—or tries to offer a sense of security in his red power tie and suit. He has made the suit, of all things, perhaps the most controversial garment of the past four years, a previously unquestioned symbol of conformity and authority that is now fighting for its soul both on the runways of Europe and on the world stage. Trump seems to believe that if you wear the suit and the big baseball cap, you’re somehow doing the job. Cuomo’s earnest belief in these traditional modes of political dress, meanwhile, makes their variations in the federal government appear all the more cartoonish.

Trump has ushered in a new age of political dressing—appearance, for Trump, really is everything. Whether one subscribes to Cuomo’s newfound appeal or not, he is engaged in a longer tradition of the public service costume. Looks aren’t everything—they’re just part of the job.

At Jacquemus, Erotica in Beige

Uniqlo U Is the Best Menswear Cheat Code