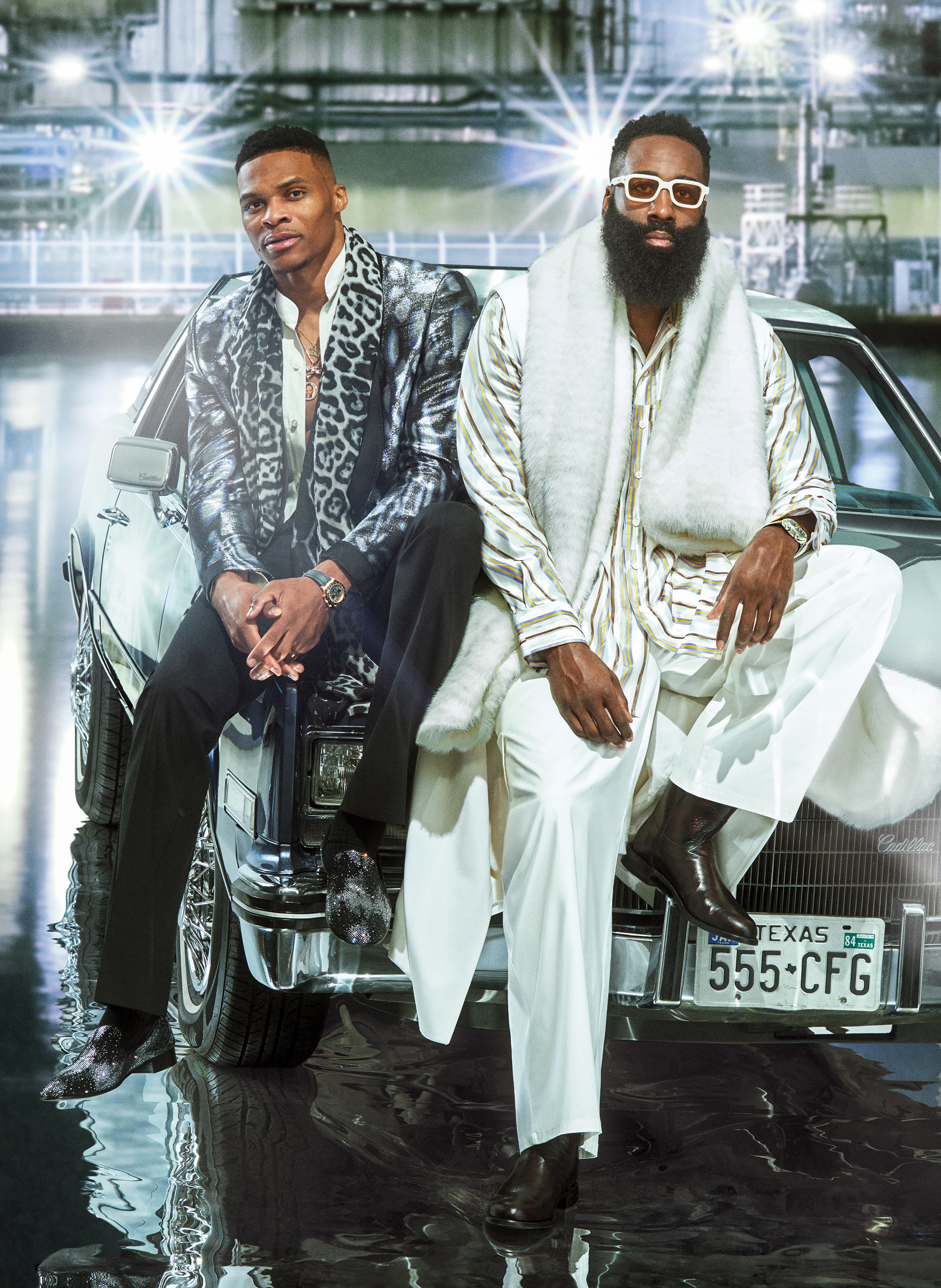 James Harden: I was.

How much money do you think James spends on clothes a year?
Westbrook: I would say…$500K. Half a mil. Minimum.

James, you’re someone who knows Russ well; what’s something you hear about him often that’s a misconception?
Harden: Um, that he’s crazy. I think people just see the passion that he plays with on the court and then think that that’s who he is off the court as well. But he’s a pretty chill, cool guy. He’s very family-oriented and has a tight group of friends that he’s known since high school. He don’t do all the extra nonsense. I think that’s why we relate so much.

Westbrook: I always give the example: When you go to work, you’re in a different mode, right? Doesn’t mean that’s how I am all the time. You can’t assume that I’m this intense guy. But it doesn’t bother me, because I know who I am.

Do you think that people have an accurate perception of you?
Westbrook: No way. I’ve been many places all around the world, or sitting with different business owners or fashion designers, and they’re always like, “Oh, I didn’t know that you were [Russell Westbrook].”

What do you think is the biggest misconception about James?
Westbrook: I think it has to do with the way he plays, and if it’s beneficial for people around him. I know his intentions and understand his game. Like if you’re able to score and do what you want at will, then you should be able to do it. You know what I’m saying? If you ask other basketball players, they’d be like, “Well, we can’t guard him.” So that’s why we [let him play the way he does].

“We haven’t had a full roster yet. Which is scary, you know? That’s the most exciting thing.” —James Harden

Is this season more fun than the previous seasons?
Westbrook: I wouldn’t say that—because for me, personally, my main objective is always to have fun. And to compete. But I think when you’re able to play and reunite with a friend or brother, then a different light switch clicks on. And I think that’s the moment that I’m in now. And being able to embrace and enjoy this moment, especially while we’re both young and competing at a high level in our prime and able to play for a championship. I think that’s the ultimate experience for me.

How do you guys feel about this experiment on this day? What’s your progress report?
Harden: Obviously we want to win every game, but we had to deal with so much adversity early in the season. You know, just like random stuff too. Clint [Capela] missing games, and Eric Gordon being out. You know he wasn’t healthy to start the season off. We haven’t had a full roster yet. Which is scary, you know? I think that’s the most exciting thing about it.

Obviously you two have dialed in your style. Do either of you guys regret your draft suits?
Westbrook: Nah.

Harden: Mine was fire. I’m not gonna lie. [laughs]

Westbrook: What did you have on?

Westbrook: You definitely wore a bow tie all the time. I don’t regret mine. I think I should’ve changed, like, my shirt. It was baggy, man.

You both have been to Fashion Week several times. And work with designers on projects and have relationships with them. What was the biggest growing pain of breaking into the fashion industry?
Westbrook: For me it was being comfortable sitting at a dinner without assuming that these designers or editors know who you are or know what you do. You know what I’m saying? I’m thinking that’s the biggest thing. And as athletes, once you bridge that gap and these editors keep seeing you over and over again, then they’re like, “Okay, now I know.…”

Drake Knows What Watch to Pair With a $150,000 Championship Ring

The Best Down Comforter for Every Kind of Sleeper in 2020