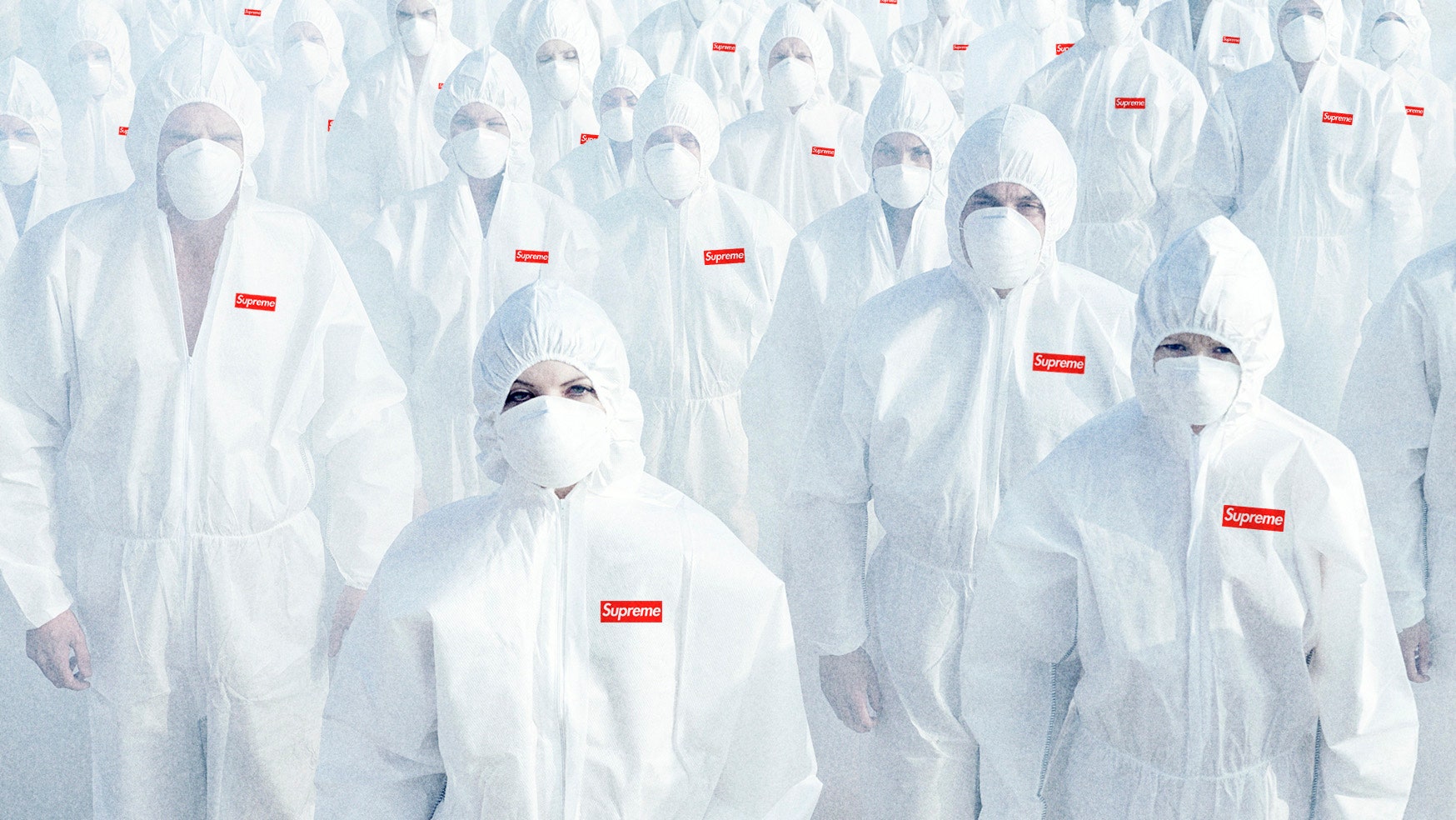 On Wednesday, the coronavirus epidemic prompted President Trump to ban most travel from Europe, Tom Hanks to announce that he and wife Rita Wilson had contracted the virus, and the NBA to suspend its season after a player tested positive. Gradually and then all at once, the breakout went from generally anxiety-inducing to specifically and awfully real. Everyone in the U.S. woke up to a new world, one reshaping itself in the face of work from home mandates and “social distancing” explainers. Except the diehards standing outside the NYC Supreme store. Who were these people weighing the risk of contracting COVID-19 against the reward of copping some sick grails?

On Thursday morning, you’d never know there was a pandemic in full effect. Hundreds of the brand’s fans (and its eager resellers) clustered together in a line that stretched from the store’s entrance on the Bowery, down along Spring Street, and part of the way up Elizabeth. “It’s business as usual,” an employee manning the front door told me.

Some of the people were in line because they love to wear Supreme gear, and you could tell by their streetwear fits; most were in line to buy and flip whatever they can. Anthony, 29 and wearing a blue North Face jacket, was there to shop the newest iteration of the outdoor brand’s collaboration with Supreme. He wasn’t worried about contracting the virus, and spun the situation with the kind of edge that would make Supreme founder James Jebbia proud. “You’re a New Yorker, you kinda thug it out,” he said.

This wasn’t that scary, either. “It’s to be expected—pandemics come, like, every four years when you think about it,” said Anthony. “So it’s whatever. It’s definitely worth it.” As we parted ways, he reached out to shake my hand. I offered my elbow up for a bump.

A little further down the line, I sidled up next to a tall, skinny kid who stuck out not because of his crispy Air Jordans or Statue of Liberty-branded Supreme jacket, but for the pair of bright blue rubber gloves on his hands. “Gotta be safe!” said Raymond, 22. “I was just thinking, Yo, I’m about to get on the train, hold onto the poles, might as well throw on some gloves.” He’d seen a rumor online that someone with the coronavirus had already been to the Supreme store, but after determining that it had been a hoax, decided to sit in line. “Especially with this number,” he said, referring to his web-lottery-determined spot in line. “I don’t really get this number much.” I asked, if he had a worse number, would he have stayed away? “I would still come, but try to keep my distance from people.”

Nick, 21, stood on the other side of Spring Street and gazed at the line through a slot in his Supreme-branded balaclava. “I don’t think it’s gonna keep me safe—it’s not a medical-grade thing. But it’s just a little something,” he said. He’d been watching the news, he told me, and was a little concerned. But as long as Supreme would have him, he’d be here. “Obviously Supreme must not be too worried about it,” he said. “I feel like they would have shut it down, with all of these people out here—and 600-something slots [online]. So there’s a lot of people who are gonna be here.”

He spends most weeks doing this, he said. “It’s my lifestyle. It’s what I like to do. People like to go fishing and hunting. I like to sit here and buy Supreme.” So what would keep him away? “If it’s something outlandish, then I’m not gonna be out here,” he said. Outlandish, we decided, might look something like the quarantine in place in New Rochelle. For now, though, he wouldn’t be moving. “You gotta still live life, though. You can’t hide. That’s how I look at it.”

How Fake Sneakers Get To America

In a Moment of Information Overload, Governor Andrew Cuomo Dresses for Facts Only